As a result of his bravery on the job, Chief Ken Cochrane was voted Suffolk County Fireman of the Year. 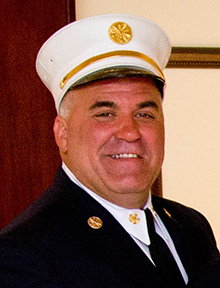 On June 15, 2012, at 8:55 p.m. the Huntington Fire Department responded to a reported structure fire at the Nathan Hale Apartment Complex, located at 44 Nathan Hale Drive in Huntington.

A neighbor advised Chief Cochrane of an occupant inside the affected first floor apartment. Within seconds of arrival, Suffolk County Police officer Joseph Lanzisera entered the apartment through a living room window and met Chief Ken Cochrane and Assistant Chief Bob Berry who had gained entry through the front door. None of those entering the apartment were wearing their Self Contained Breathing Apparatus (SCBA’s) or protective gear at the time of entry.

Chief Cochrane and Officer Lanzisera were forced to pass the fire through a hallway and quickly located the victim, an 84 year-old disabled woman. The men carried her out of her bedroom to safety while Assistant Chief Berry suppressed the fire with a water can before the first Engine arrived on the scene.

Though a relatively small blaze, both Chief Cochrane and Officer Lanzisera were confronted with very heavy toxic smoke due to burning plastics and carpeting.

The victim was found covered in black soot and sustained 2nd degree burns to her head, face and hair as well as smoke inhalation. Both the victim and Officer Lanzisera were taken by ambulance to Huntington Hospital for sustained injuries and smoke inhalation.

After more than a month in the hospital, the victim has fully recovered from her injuries and is back home. Without Chief Cochrane’s quick, heroic actions, the outcome of this incident would have been much different.