It’s a night on the town that’s over 141 years in the making. Huntington Fire Department officials are now in the possession of a ticket for a May 15, 1873 event hosted by the fire department, which District Manager Bruce Smith said was discovered as a demolition crew prepared to tear down the former firehouse at 10 Wall St., which was most recently the Black Lantern sushi den/lounge. “With all the stuff being moved around…I think they found it on the floor when they started taking the floorboards up,” Smith said. “It was along the edge of the wall and the floor.”

The ticket, which Smith said appears to have been damaged after being “waterwashed” or having something stuck to it, promises an “amateur dramatic performance” hosted at the Huntington Fire Department’s Assembly Rooms. Also visible on the ticket is a bit of French – l’on parle Francais is all that’s visible and below that, the price, a princely sum of $1.

“Which, to me, is expensive for 1873,” Smith said with a laugh. Run a circa 1873 dollar through an inflation calculator, and that $1 is worth about 19 bucks today. It’s been a good month for history in the Huntington Fire District – the district is putting the finishing touches on a new museum, where the ticket and other artifacts recovered from 10 Wall St. will be displayed and incorporated. The old firehouse building was torn down to make way for a three-story, 8,000 square-foot building with a restaurant proposed for the first floor and two apartments each in the second and third floors above.

Huntington’s Mary Smith, who is erecting the new structure, will incorporate a tribute to the Huntington Fire Department into the interior design, she told Long Islander News in an interview last week.

“We got wood frames, rafters and some flooring, siding and windows that we’re going to reclaim and display,” Smith said. She plans to have shovels in the ground by April 2015. Demolition crews were still pulling out the final pieces of building as of Wednesday, after spending much of the week clearing demolition debris. 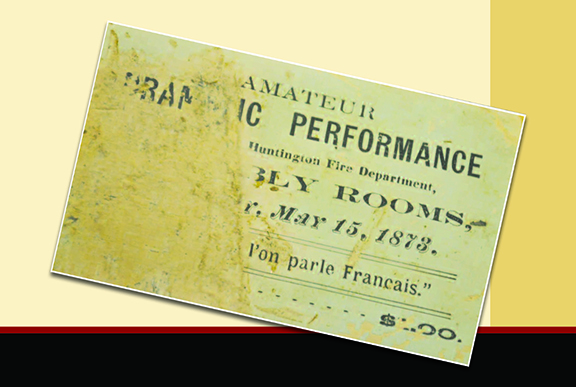 Legal Notice – The purpose of hiring an Engineer/Architect to design the parking lot, curbs, lighting and drainage to maximize the number of parking spots